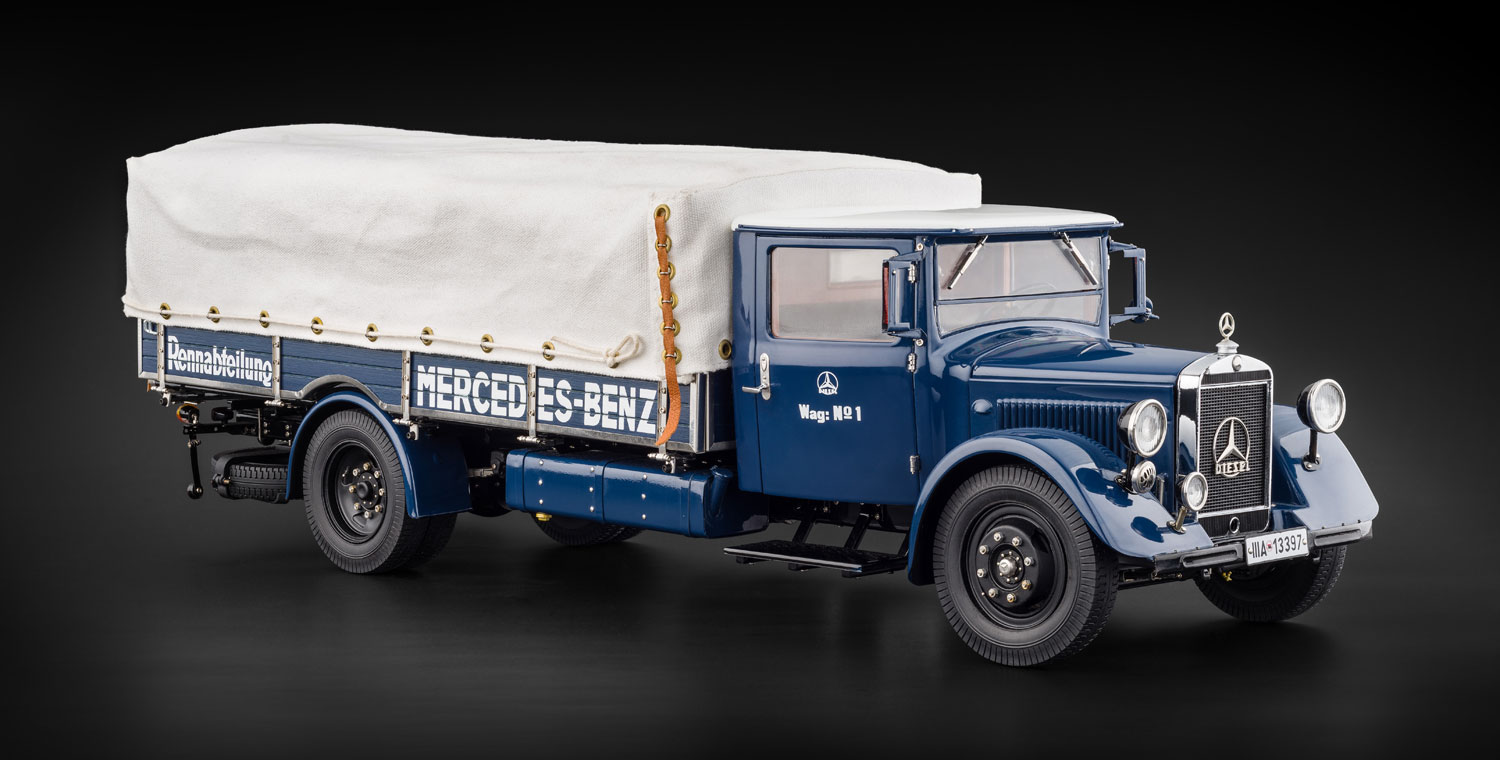 After the successful launch of our post-war transporter “Blue Wonder,” it is time to offer a pre-war model. Here is a platform-truck of the type LO 2750, equipped with a diesel-engine and a tarpaulin-covered platform frame. The cover serves to protect the valuable racing car on board from adverse weather conditions and prying eyes. An important race could draw a whole fleet of these transporters; unfortunately not a single one of them has survived to this day.

Mercedes-Benz amassed dominant victories with its Silver Arrows in the racing of the 1930s. Public attention tended to focus on the winning cars afterwards: Types W25, W125, W154 and W165. But a no less significant role was played by the racing-car transporters, which carried renowned Silver Arrows to the race tracks all over Europe safe and sound.

In the process, they created an indelible image of brand excellence and commitment to competition. For transporting racing cars, Mercedes-Benz had a 2.75-ton truck of the type LO 2750 readily available — produced by its own factory in Gaggenau. With a low-lying floor and a low loading-platform, the vehicle was a nice fit for the task of loading and unloading Silver Arrows.

A reliable and economical 4-cylinder diesel engine with an output of 65 hp facilitated a safe and punctual transport to the race tracks. Soon, painted in an iconic Mercedes blue with the lettering “Mercedes-Benz Rennabteilung” at its tail, the truck became an integral part of the factory transport-and-supply chain. The racing scene was no longer imaginable without them.

The LO 2750 Transporter fleet often returned to Stuttgart as celebrated winners. With the tarpaulin removed and the side boards and tailgate let down, the loaded victorious cars were displayed for the local crowds to see. Because of the significance of these pre-war Silver-Arrow transporters, CMC decided to honor their memory in the form of an authentic high-end model despite the challenges that came with it.

Supermodel of the year 2017
Awarded by: Magazine "Modellfahrzeug"
All awards »

Model of the year 2017
Awarded by: Magazine "Modellfahrzeug"
All awards »

Model truck of the year 2018
Awarded by: Modelcar Hall of Fame
All awards »