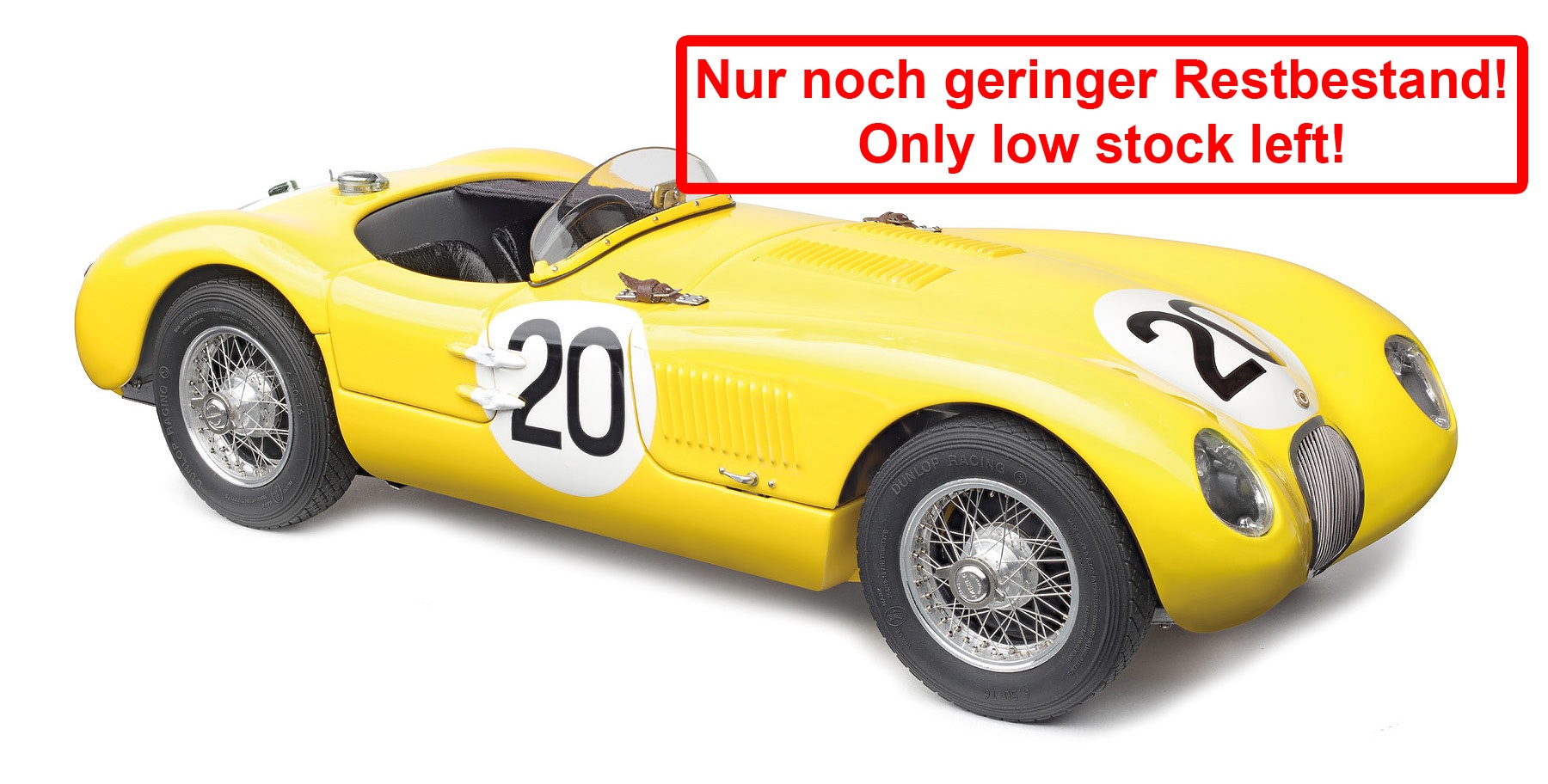 From the beginning the long-distance classic was the main target for Jaguar, they were aware of the marketing effect of a success in Le Mans. As backup for the three cars Jaguar factory team, Ecurie Francorchamps, who was founded the year before, came to Le Mans and enjoyed the same factory management as the Lightweight C-Types. The impressive result of the two drivers de Tornaco and Laurent in the almost standard C-Type was a ninth overall at the finish. CMC therefore decided to develop this in terms of motor sports and color scheme interesting variant. The result is a miniature of impressive charisma and sporty dynamics.

Ecurie Francorchamps was founded in 1952 by Jacques Swaters. The Belgian team took part in several Formula 1 races from 1952 to 54, but the only victory it scored was at the 1956 Avus race, a Non-World Cup Grand Prix, with the team owner at the wheel. Ecurie Francorchamps also contested in sports car racing until 1978, campaigning Ferrari race cars. But its beginning can be found in the use of Jaguars. It was 1953 when the Belgian team took part in the Jaguar factory entry at Le Mans. Impressed by their ninth-place finish there, Jaguar boss Lyons sent the Belgians to the remaining races of the season at the Spa and Nürburgring. Ecurie Francorchamps
competed with Laurent and Swaters at the Spa 24 Hours in July, but suffered an engine failure that caused early retirement. This happened to the Belgians again in the Eifel race at the end of August: retirement compelled by engine damage.

In the wake of this race, Chassis XKC 047 was sent back to Jaguar Cars Ltd. in Coventry for a new engine with a Weber carburetor system and a modified rear suspension of the Lightweight model. This done, the C-type XKC 047 was handed over to Dunlop as a test and development vehicle. Later, XKC 047 resumed racing until 1959. Starting from 1963, it remained in the possession of one family for more than half a century. It was the cornerstone of the significant Jaguar collection by Guy Griffith in southern England. In 2016, Chassis XKC 047 was sold at a Bonham auction in Monaco for 7.2 million euros – unrestored and totally authentic.

Ecurie Francorchamps returned to compete in the 1954 season with a Jaguar C-Type (XKC 011) that was rebuilt and fitted with Weber carburetors. It was successful once more: fourth place at Le Mans, third place at the 12 Hours of Reims, and seventh place at Tourist Trophy.