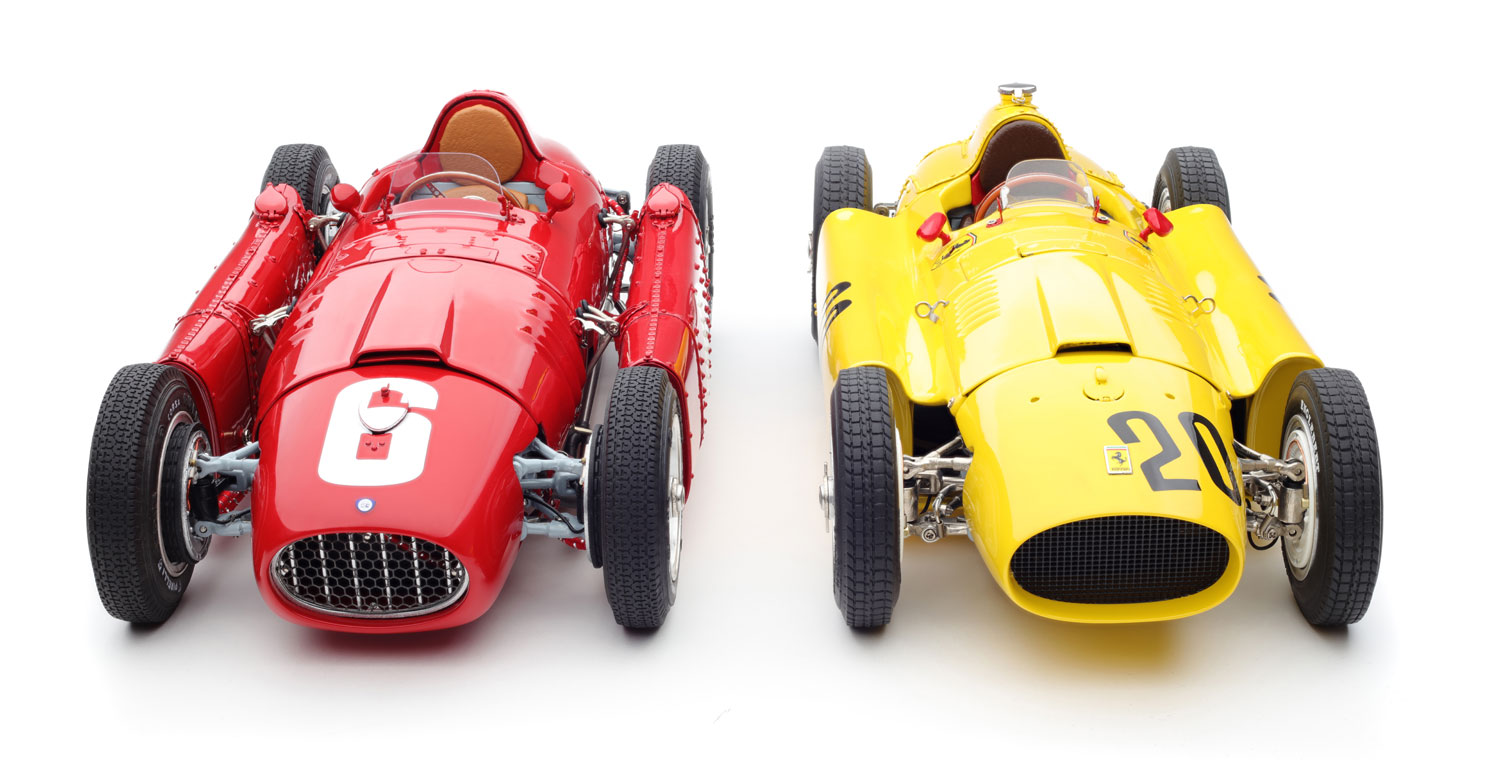 CMC is delighted to offer you a detailed look into the evolution of the D50 race cars with this Lancia-Ferrari bundled edition. It consists of 2 models. The one with #6 is an epitomy of the Lancia D50 from 1955, whereas the one with #20 represents the further-evolved Ferrari D50 from 1956.

This bundled edition is limited to 1000 sets worldwide, and the two component replicas are available only in the form of a set.

The Lancia D50 project started in 1954 as an innovative and ground breaking endeavor. Adverse circumstances, however, led Lancia to end its Grand Prix ambitions in mid-1955. The D50 project was taken over by Ferrari, and in 1956, the newly-perfected Ferrari D50 enabled Juan Manuel Fangio to win the World Drivers’ Championship for a fourth time.

CMC releases this set of models to outline the remarkable evolution of the D50. It consists of one Lancia D50 with start number #6, in which Alberto Ascari won the 1955 GP of Turin, and one Ferrari D50 with a yellow Belgian racing color finish and start number #20, in which André Pilette took a sixth place at the Grand Prix of Belgium in 1956. Itemized as M-184, this bundled edition is limited to 1,000 sets worldwide.

The 1956 Grand Prix of Belgium took place on June 3 at the Circuit de Spa Francorchamps. Ferrari’s lineup included two well-known Belgian racecar drivers Paul Frère and André Pilette in addition to its three regular entrants — Fangio, Castellotti and Collins. As the race unfolded, incidents broke the ranks continually. Stirling Moss initially led the field in his Maserati 250F, but on lap five, Fangio surpassed him to take the lead. After Moss went off the track with a wheel coming loose, Collins advanced to the second position. Moss managed to continue the race in one of his teammates‘ car, but he was one lap behind the leading Fangio. Fangio’s car, however, developed a serious engine problem on lap 23, and the race was over for him. Collins took over the lead, which he maintained until the end of the race. Paul Frère from Belgium finished second, and Stirling Moss came in third. André Pilette took a respectable sixth place in his #20 yellow-bodied Ferrari D50.

The Lancia D50 showed a lot of promise at the 1955 GP of Turin, Italy (also known as the Gran Premio del Valentino), which took place on March 27. Scuderia Lancia sent Alberto Ascari to the race in a Lancia D50 with start number #6. Among the other contestants were also his teammates Eugenio Castellotti and Luigi Villoresi from Lancia as well as rivals from Maserati and Ferrari. All in all, competiton was steep. However, starting from pole position, Alberto Ascari put up a superb race and crossed the finish line to win his first Grand Prix victory for Lancia.