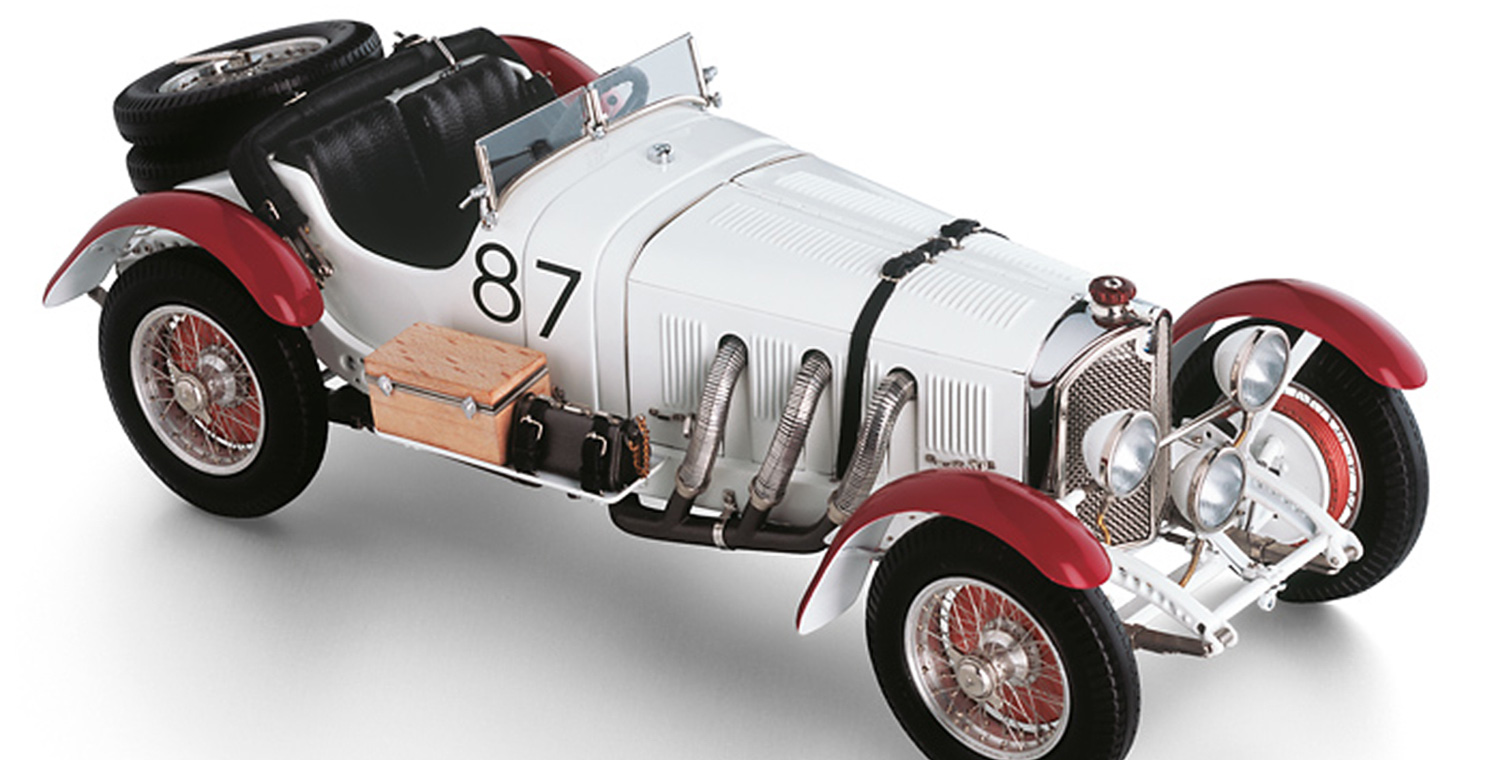 The Unforgettable “White Elephant”
By 1931 Alfa Romeo and Bugatti had become serious contenders for Mercedes-Benz on the race track. Professor Ferdinand Porsche, head of Mercedes-Benz’s racing car development, responded by reducing the weight of the SSK, known as “White Elephant“ because of its mighty appearance, overwhelming power and white painting. Over 125 kg were shed after holes were drilled in the frame and every other possible place that was not safety-relevant. As a result, the SSK transformed into the SSKL (Super Sport Kurz Leicht = Super Sport Short Light). With this new racing car, Afred Neubauer (head of the racing depart¬ment) and his very small crew, undertook their greatest racing adventure ever at the Mille Miglia in 1931.
11th April, 3:20 pm: Rudolph Caracciola and his co-pilot Wilhelm Sebastian, start-no. 87 faced the hopeless fight against their over-powerful Italian opponents. Die 1,635 km long race track leads from Brescia over Florence to Rome, further over the Abruzzo to the Adriatic Coast and from there back again to Brescia over Bologna.
12th April, 7:22 am: The winner of the Mille Miglia crossed the finish line, in a new record time, after 16 hours, 10 minutes and 10 seconds. With an average speed of 101,1 km/h. And – the sensation is perfect- for the very the first time, a driver from a foreign nation with a foreign car: Rudolph Caracciola, the titan at the steering wheel. Whereby Mercedes could barely support him because of an economical crisis. Even for the single pit stops there were not enough men available, so they had to play turtle and the hare with their driver – abbreviations made it possible.
Now, in 2016 we are celebrating the 85th anniversary of this terrific victory. CMC observes the occasion of this event with a perfect replica of the unforgettable champion car. After extensive and time-consuming research, CMC is able to uncover many details that are important in presenting the original look of the 1931 Mille Miglia victor. All these details are incorporated into the precision model, composed of 1,885 parts, that CMC is offering to you.
By the way, only approx. five till seven original vehicles were ever built in the SSKL lightweight-design. Our true-to- scale miniature-jewel is as perfect as the original and brings you into the world of compressor-screaming race-bolides.