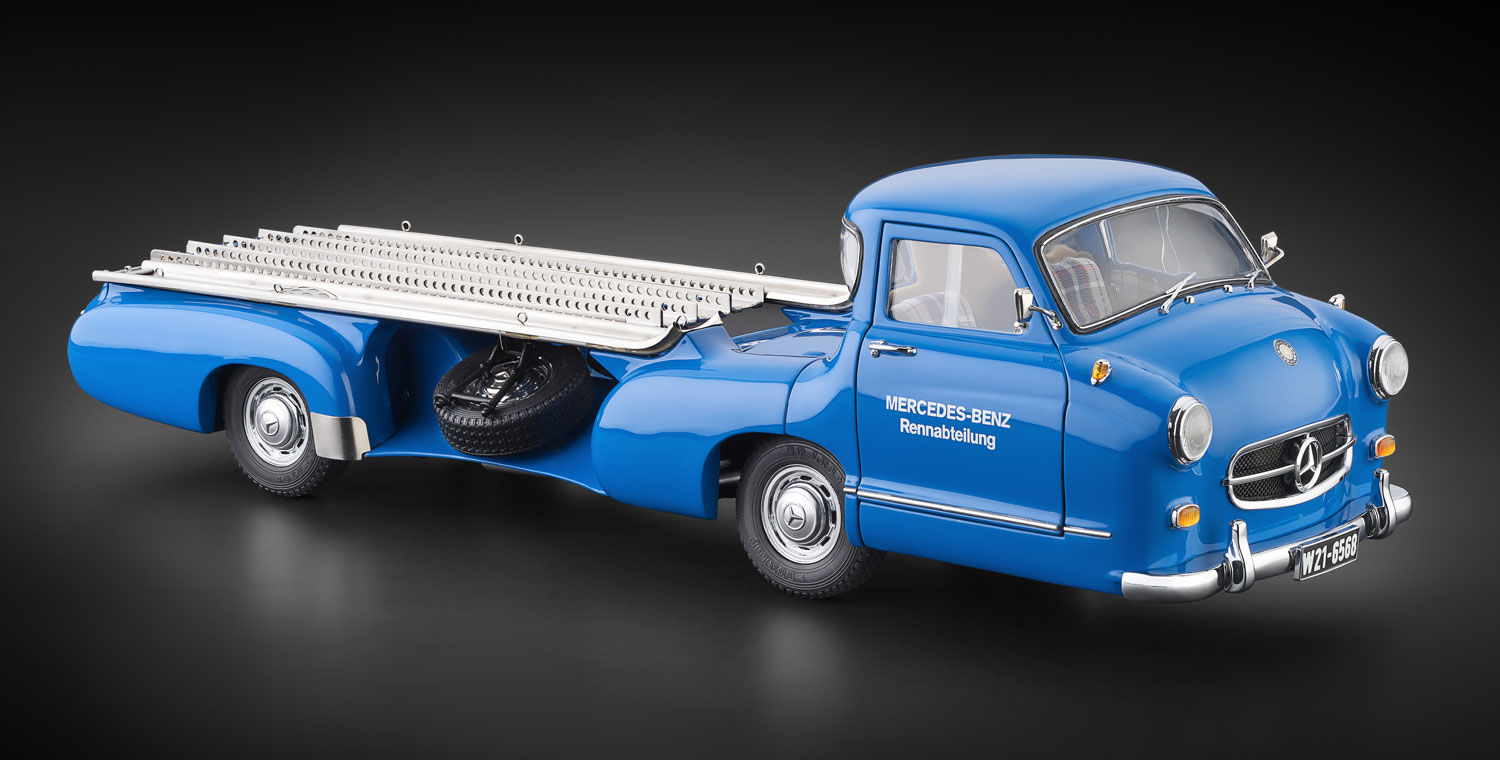 In 1954 a unique hand-crafted transporter was born out of the innovative efforts by the Daimler-Benz test department, and its curvaceous contour has remained unique ever since. Used by the MB racing division during the 1954/1955 season, the vehicle did a sensational job in fast transporting the race cars W196 and 300SLR.

CMC offers an extraordinary collector’s item of this car, which boasts an outstanding quality combining multiple functional parts with a true rendition of the car’s original charms.

For years, the “Blue Wonder” was one of our best-selling models. That was no surprise if one considers its gorgeous contour and multiple functional parts. The adoption of premium materials, together with perfect craftsmanship and a deep blue high-gloss finish, made this replica a true collector’s item that belonged in a special class.

Years have elapsed since this model was sold out, and it is time to refill the void. But rather than offer a remake of the old M-036, we are introducing a new version that incorporates details and accessories newly discovered from the archives. Among them are the chromed wheel hubs, an embellished Mercedes star inlaid in the front, orange-colored auxiliary lights, and stone-chipping guards on the rear fenders, not to mention a rear plate-light assemble, an oval national symbol “D” in the rear end, and the loading ramps that are painted in matt black, instead.

This new offer certainly comes belated to those who are eagerly looking to find a time-proper transporter for their W196 Monoposto and Streamliner, 300 SLR of various types and Uhlenhaut Coupé!

In 1954, the Mercedes-Benz test department developed a hand-crafted, one-of-a-kind model — the Mercedes-Benz racing car transporter. What with a deep blue finish, the soft curves of its body, and a top speed of 170 km/hr, the “Blue Wonder” touched off as much sensation as the racing cars with which it was loaded.

After Daimler-Benz withdrew from racing in 1955, the “Blue Wonder” disappeared from the public view and was eventually scrapped in 1967. Only in the beginning of the 90’s did Daimler-Benz recall the memories of this jewel and have a replica rebuilt under the supervision of the Mercedes-Benz Classic Center to ensure that it was true to the original.

Supermodel of the year 2002
Awarded by: Magazine "Modellfahrzeug"
All awards »

Model of the year 2002
Awarded by: Magazine "Modellfahrzeug"
All awards »

Model of the year 2002
Awarded by: Magazine "NAMAC
All awards »