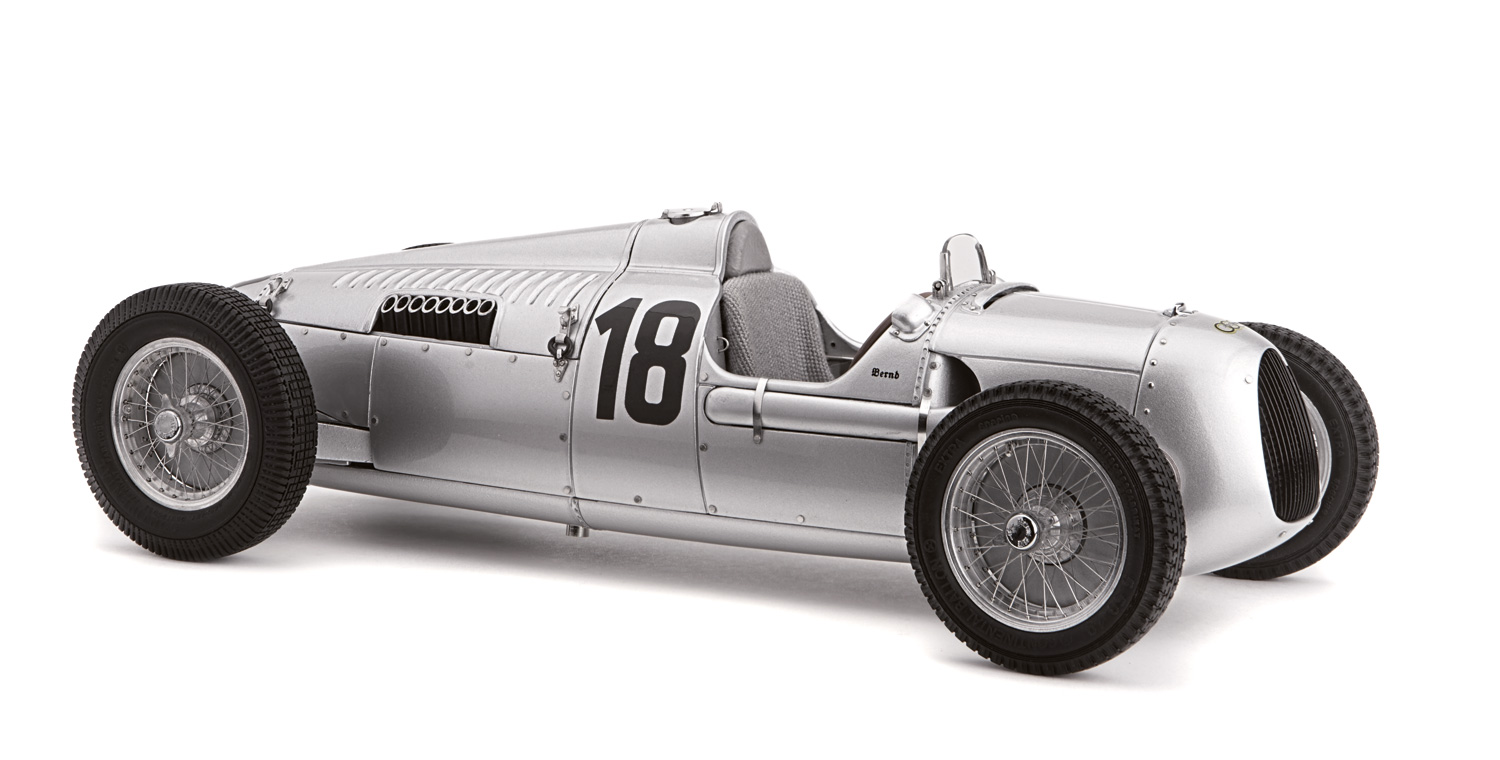 “Unprecedented …. Auto Union is raising the bar of competition for the racing scene!” A headline of sports news from 1936 might well have read like this. We’re talking about the Auto Union Type C bolide from 1936-1937 which participated at the famous “fog-race” at the Nürburgring in 1936. CMC is providing a high class model of this race car to the market.

There is hardly another vehicle besides this Grand Prix-race car, designed by the ingenious constructor Ferdinand Porsche, which wrote sustainable race history like the Auto Union Type C.

On June 14th 1936, Auto Union sent its best driver Bernd Rosemeyer to compete in the famous Eifel race at the Nürburgring, driving an Auto Union Type C with starting #18. This event became one of the most memorable fog-races at the Nürburgring. It consisted of 10 laps for a total distance of 228 km. The race was dominated by three prominent drivers of the time from the very beginning. Leading the way was Rudolf Caracciola in a Mercedes W25, next came the veteran warrior Tazio Nuvolari in an Alfa Romeo P3, and behind him was Bernd Rosemeyer in a Type C. After the 3rd round Nuvolari surpassed Caracciola to take the lead. But Rosemeyer was catching up steadily. Following a shock absorber failure that forced Caracciola to retire, a thrilling duel for victory unfolded between Nuvolari and the daredevil Rosemeyer.

True to his nickname, Rosemeyer endeavored to become the undisputed front-runner by the 7th round. At a significant distance behind him was Nuvolari, running in the 2nd place. During the 8th round, however, something unforeseen happened. With the sudden descent of a heavy fog, the Nürburgring was enveloped in an impenetrable wall of mist. Visibility was reduced to less than 20 meters! And what did Rosemeyer do? This crazy guy kept going full speed ahead. With a seriously blurred vision, he had to rely on his route memory of the course, a 7th sense for orientation, and an undaunted spirit to win the race. A legend was born.

Bernd Rosemeyer went down in racing history as the “Fog Master.” Auto Union was setting a new benchmark that put an end to the dominance of Mercedes Benz.

Supermodel of the year 2004
Awarded by: Magazine "Modell Fahrzeug"
All awards »

Model of the year 2004
Awarded by: Magazine "Modell Fahrzeug"
All awards »

Model of the year 2003
Awarded by: Magazine "Modell Fan"
All awards »