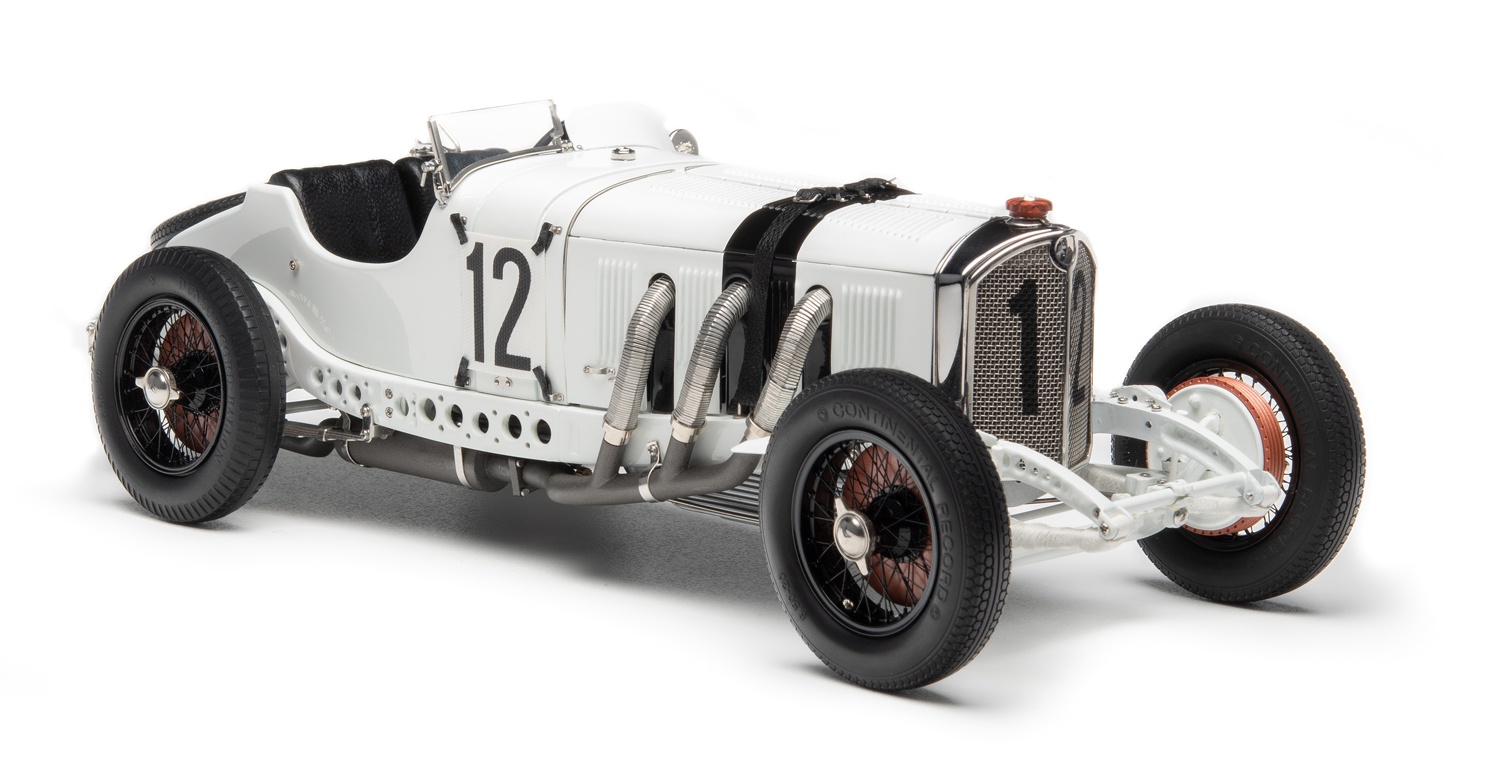 The SSKL often went by the affectionate nickname of “White Elephant.” On the one hand, this could be attributed to its seemingly unruly power and colossal size. On the other, it had much to do with the German racing livery that Rudolf Caracciola, Hans Stuck and Otto Merz had on their SSKLs and the plethora of honors they won in racing the SSKLs.

Includes 16% VAT
Es fallen evtl. Versand­kosten an additional shipping costs may apply
Dieses Produkt ist aktuell nicht verfügbar! In unserem Shop-System können Sie jedoch das Produkt vorbestellen. Sie bezahlen erst, wenn das Produkt verfügbar ist und werden per E-Mail von uns informiert. This product is currently not available, but you can pre-order it here. When the product will become available, we will inform you by e-mail and you have to make the payment only then.
Request for item via Email or telephone: +49 711 440 07990
Item no. M-189 Categories: All Products, CMC Mercedes-Benz, Models 1/18, New Items 2020

From the mid to late 1920s and even in 1931, the world racing scene was largely dominated by one au-tomotive marque: Mercedes-Benz, especially with its SSK/SSKL models that is empowered by the le-gendary 7.1 liter compressor.

The SSKL often went by the affectionate nickname of “White Elephant.” On the one hand, this could be attributed to its seemingly unruly power and colossal size. On the other, it had much to do with the German racing livery that Rudolf Caracciola, Hans Stuck and Otto Merz had on their SSKLs and the plethora of honors they won in racing the SSKLs. Despite the global economic crisis and limited support from the Daimler-Benz factory in Stuttgart Untertürkheim, Rudolf Caracciola and his two teammates ma-naged to keep up their chins and brave through the hardships. In addition to his victory at the 1931 Mille Miglia, Caracciola finished first in the 1931 Grand Prix of Germany, whereas Otto Merz and Hans Stuck took a fifth and sixth places in the same race.

CMC has already replicated Caracciola‘s winning car with starting number 8. This year we would like to pay tribute to the achievements made by Otto Merz and Hans Stuck at the German Grand Prix on July 19, 1931. With that in mind, CMC will develop and make available authentic detailed replicas of their SSKL racers in 1:18 scale.

All racing cars started off at the same time. It was assumed that the two groups would finish the race around the same time. To distinguish them visually for the pit crews and the spectators, Group I cars we-re marked with a wide black horizontal stripe over the hood, whereas Group II cars used a wide white stripe instead. Since many of the small-displacement race cars were native to Germany and had a white-finished body, the white stripes on them were outlined in a black color additionally.

The Mercedes team set itself up at the Nürburgring two weeks earlier. Before long, it buckled down to test driving under the direction of Alfred Neubauer. Apart from the practices of racing, the training program also included how to change tires with a newly-developed jack and manage the refueling pro-cess, etc. This type of training went so far that together with his mechanic, Caracciola was able to com-plete a tire change in a minute and 10 seconds. His teammates were not much slower.

48 entrants of Groups I and II from 10 different nations were ready to start off on the rainy day of July 19, 1931. Mercedes fielded its SSK and weight-reduced SSKL vehicles, and the latter were primarily saved for its famous pilots like Caracciola, Branditsch, Merz, Stuck, and Spandel. The main rivals were from the other well-known marques, such as Bugatti, Maserati and Alfa Romeo, which provided much lighter and better engineed vehicles to their internationally-renowned pilots, such as Chiron, Varzi, Fagioli or Nuvo-lari.

The race proved to be a clear win for Rudolf Caracciola, who dominated from the start to the finish. Only after the 13th lap, when it stopped raining, was Louis Chiron able to start undercutting Caracciola’s lead in a Bugatti. But it was too late, for Caracciola was so far ahead. The other two Mercedes pilots, Otto Merz with starting number 12 and Hans Stuck with starting number 10, drove a consistent and canculated race to take the respectable fifth and sixth places.