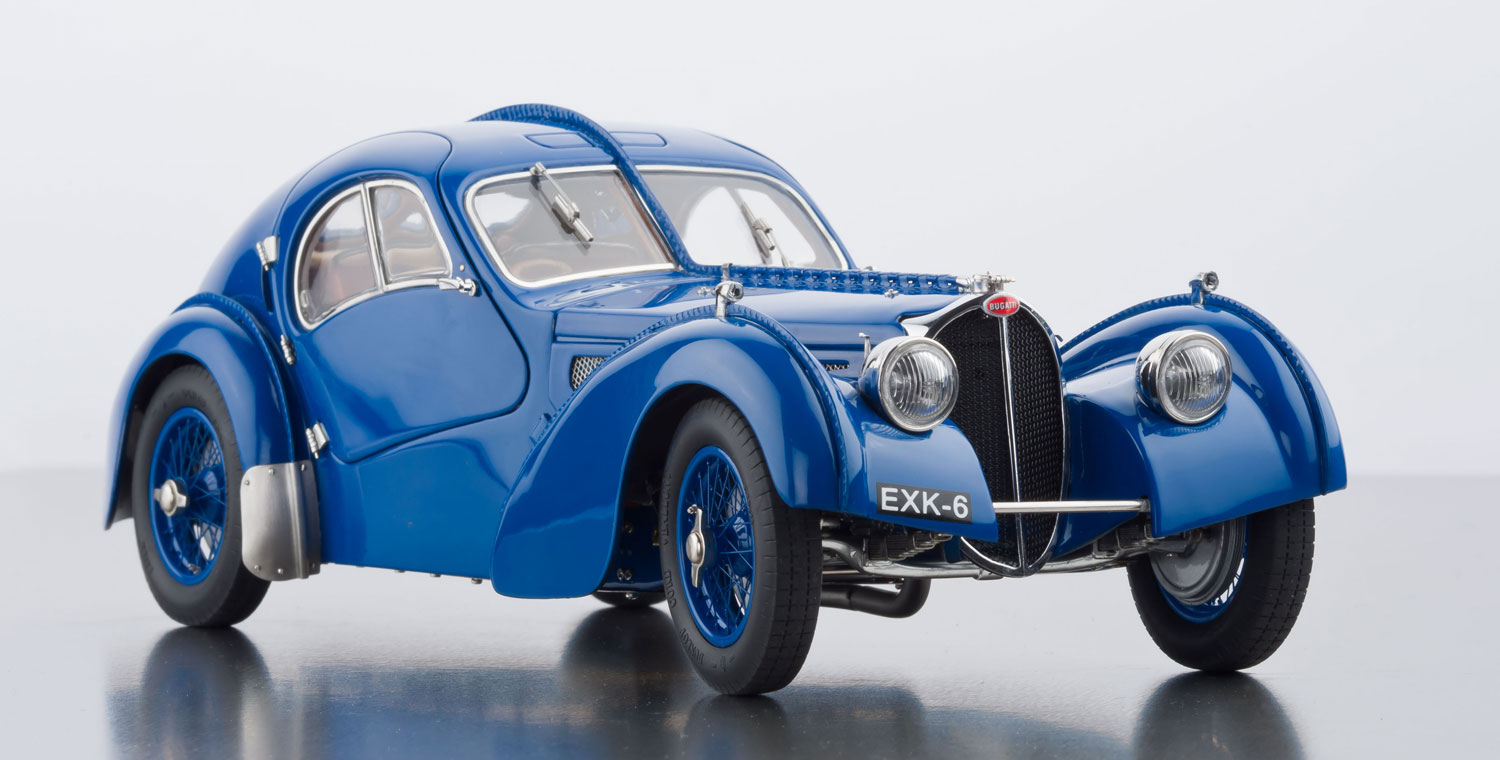 In 1936, Bugatti developed the Type 57 SC Coupé, a sports car that is still considered one of the most beautiful in automobile history. Bugatti built only three examples of the Type 57 SC. This fascinating two-seater was equipped with a compressor (Roots-Supercharger), which boosted the maximum output to approx. 200 hp. This enabled the Atlantic to reach a top speed of about 200 km/hr, making it the fastest street sports car of its day.

For quite some time, experts all agree that the Bugatti 57 SC Atlantic Coupé belongs in the most beautiful cars that were ever built. Its streamlined body is a classic of engineering decorative art. Only three vehicles of this fascinating sports car have been manufactured. In spite of this, you can own such a beauty, albeit in the form of an exquisite miniature. You will be surprised how it does justice the original.

The development of the Atlantic Coupé was intellectually indebted to Ettore Bugatti’s son, Jean. Only 26 years old, he came up with a masterpiece that made automobile history. What he presented was a design that had never been seen before, and it outshined anything else. The car has upheld its halo and fascination to this day. By the way, the dorsal seam that goes from its wind shield to the rear end, is just a style element. It`s reminiscent of the seam that held the two body half of the prototype car “Aerolithe” together.

But not only the appearance of the sports car caused a lot of attention. The Atlantic-Coupé was one of the most powerful cars of its time in the world. The 3.3 litre 8-cylinder in-line-engine and two overhead cam shafts became powered by a compressor. Approximately 200 hp accelerated the car to sensational 200 km/h.

But how did the Atlantic received his name? Well, it`s a common assumption that Jean Bugatti chose this name to honor his adored sculptor and pilot Jean Mermoz. He tried to cross the South-Atlantic in 1936 by plane and disappeared without a trace.

Our original was the third and last produced Atlantic, delivered in May 1938 to the English businessman R.B. Pope. He kept the car for nearly 30 years. We spared no cost and effort to find out and realize all single details of R.B. Pope`s original car and transferred them to our model. Only a person without any petrol it its blood could resist this phenomenal replica. Words are just not enough to describe this beauty. Grant yourself this extraordinary collector`s item of stable value and explore its countless highlights.