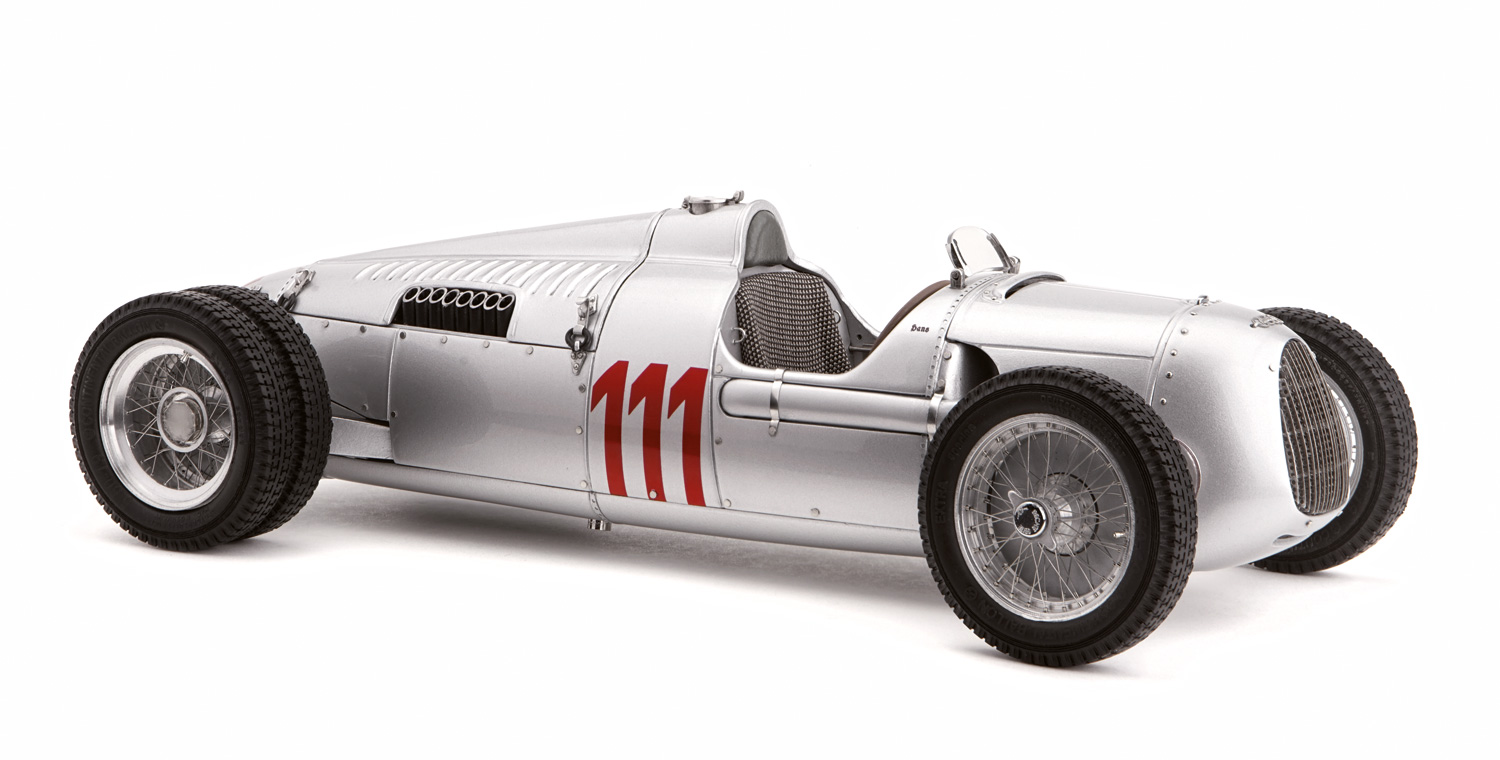 Hill climbs always offer a variety of exhilarations in motor sports. They had become very popular by the 30’s, thanks to an increasing number of Grand-Prix racecars getting involved in their races. Our hand-crafted metal precision model represents the Schauinsland-winning car of Hans Stuck from 1937 with starting #111 and twin tires mounted on the drive-axle in the rear. The model is built from 1,301 single parts.

The legendary hill-climb track at the Schauinsland Mountain near Freiburg was internationally famous. The first hill-climbing race took place there in 1925. In the following years the race grew to be an international competition, which often attracted more than 20,000 spectators during the golden era of the Schauinsland hill climbs in the 30’s.

This was very true of the 13th Schauinsland hill climb during the Grand Prix of Germany; it took place on August 1st,1937 and boasted a registration list of drivers from 10 different nations. Most noteworthy were the two top racing teams: Auto Union with Hans Stuck and Bernd Rosemayer and Mercedes-Benz with Rudolf Caracciola, Manfred v. Brauchitsch and Hermann Lang. The race-track was 12 km long, leading all the way to the top of Schauinsland Pass with 178 turns for drivers to negotiate and an ascent of 780 meters on slopes that could be 12˚ uphill.

At the end of the race, Hans Stuck lived up to his nickname “King of the Mountains” and raced his Auto Union Type C with twin-tire rear wheels and starting number 111 to be the winner by using one second less than his team mate Bernd Rosemayer. The latter was also on a Type C, but with single-tire rear wheels. Mercedes-Benz didn’t have a chance that day. Rudolf Caracciola and Hermann Lang, each on a W125, finished 3rd and 4th.

Back then the drive-axle was often fitted with twin tires in order to improve the transmission of motor torque onto the road. This resulted in better traction and made it easier to control the veer-off forces in narrow hill curves. But ultimately, it was not only the engine power, but also the driving skills and, above all, the cornering technique of a pilot that were essential for winning the victory.

Our hand-crafted metal precision model is a replica of Hans Stuck’s winning vehicle with start-ing number 111 and twin-tire rear wheels.

• Elimination of the side-mirrors left and right
• Vertical air intake slit below the radiator grill
• Auto Union emblem (4-rings) on the front in 3D-design
• Imprint “Hans” on the outside of the cockpit on the both sides
• Twin-wheels on the rear axle, mounted with octagon-screws
• The starting number 111 in red, printed by the tampon printing method left and right on the middle of the car and also on the rear

Occasionally, the wheel base of the Auto Union bolides became shortened and the fuel tank became downsized, at classic hill climb races. Original data thereto were unfortunately not available.