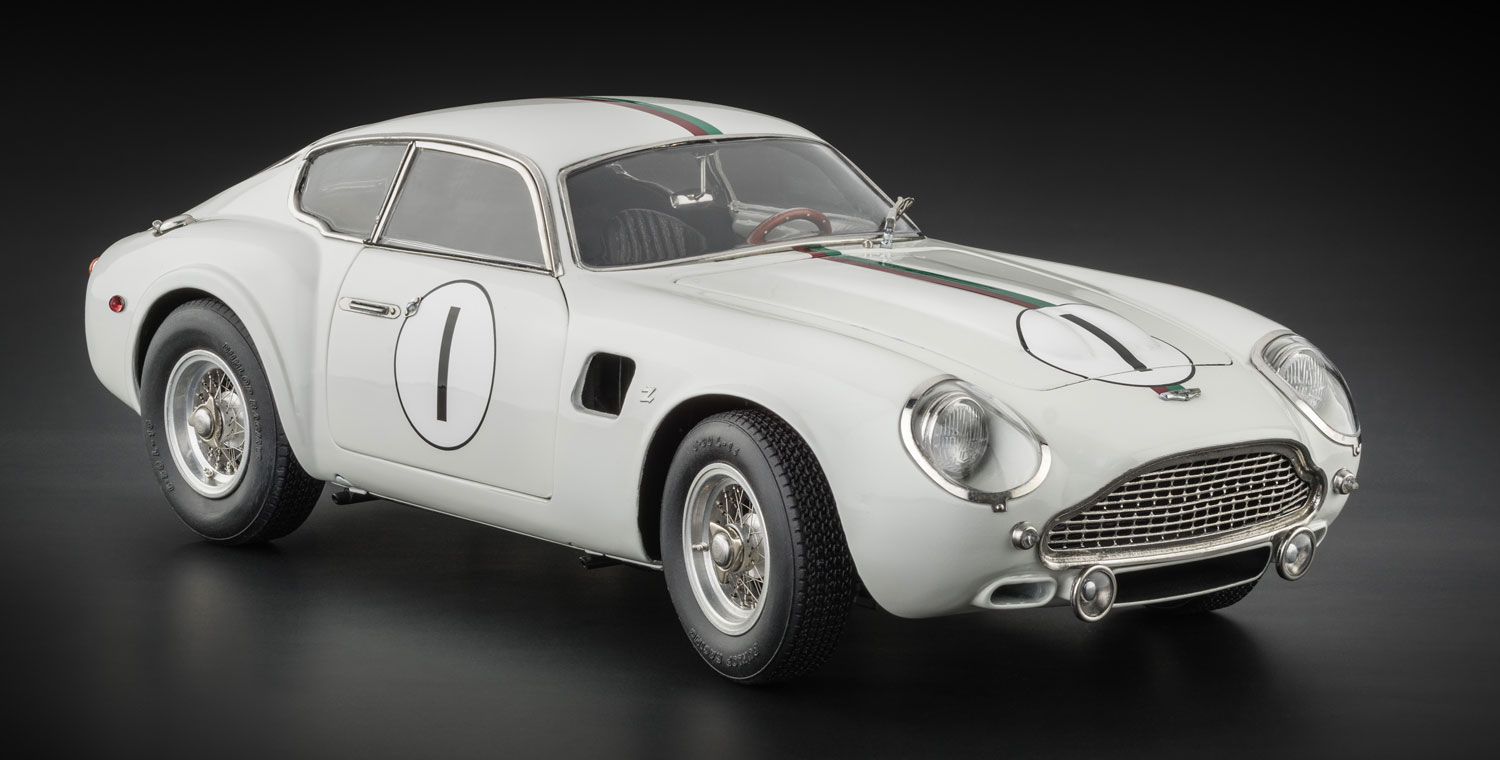 Big-name manufacturers of racing cars were always eager to meet the challenge of the endurance race of the world-famous 24 Hours of Le Mans. In 1961 French private drivers Jean Kerguen and his co-pilot Jacques Dewez joined the race with their Aston Martin DB4 GT Zagato, and they faired very well until bad luck struck at the last minute.

CMC replicated their creamy white DB4 Zagato with starting number 1 and a prominent red/green race stripe as a high-end model.

Includes 19% VAT / Mwst.
Es fallen evtl. Versand­kosten an additional shipping costs may apply
Dieses Produkt ist aktuell nicht verfügbar! In unserem Shop-System können Sie jedoch das Produkt vorbestellen. Sie bezahlen erst, wenn das Produkt verfügbar ist und werden per E-Mail von uns informiert. This product is currently not available, but you can pre-order it here. When the product will become available, we will inform you by e-mail and you have to make the payment only then.
Request for item via Email or telephone: +49 711 440 07990
Item no. M-139 Categories: All Products, CMC Aston Martin, Models 1/18

Jean Kerguen, one of the best private race drivers of France in the late 1950s, qualified to participate in the 1961 Le Mans with his Aston Martin DB4 GT Zagato. While preparing for the race, he won the support of Marcel Blondeau, the official Aston Martin dealer in France and owner of Garage Mirabeau. Especially helpful was Des O´Dell, an Aston Martin expert on the Mirabeau team who was experienced in race car development and had an excellent grasp on the Le Mans racing scene. Jean Kerguen and his co-pilot Jacques Dewez (nickname “Franc”) were well-prepared when they took off from the front row of the first grid and were joined by two more Aston Martin cars from the British racing team ERS.

The start was excellent for Kerguen’s Zagato. To the delight of the pilots as well as the whole racing team, the subsequent racing proved to be a smooth run, as well. The only mechanical intervention that had to be made was a change of the brake pads after 14 hours and then clutch adjustment after 16 hours. When Kerguen made his last pit stop after 23 hours of racing, he was in the 9th position. Jacques Dewez was to take over and race the remaining 50 minutes. But much to his horror, no matter how he pushed the starter button, the car wouldn’t start! Quick checks performed by Des O´Dell couldn’t identify any apparent problems with the battery, cables, or starter. Deeply disappointed, the team had to throw in the towel after 286 laps with only 50 minutes remaining before the end of the race.

Before the team had to withdraw, its Zagato was in the 3rd position of the GT-class, which made it the best-accomplished British car in the field. In the wake of this race, an extensive inspection was conducted of the car, which turned to be in a perfect condition, except for a starter that broke down during the final pit stop.