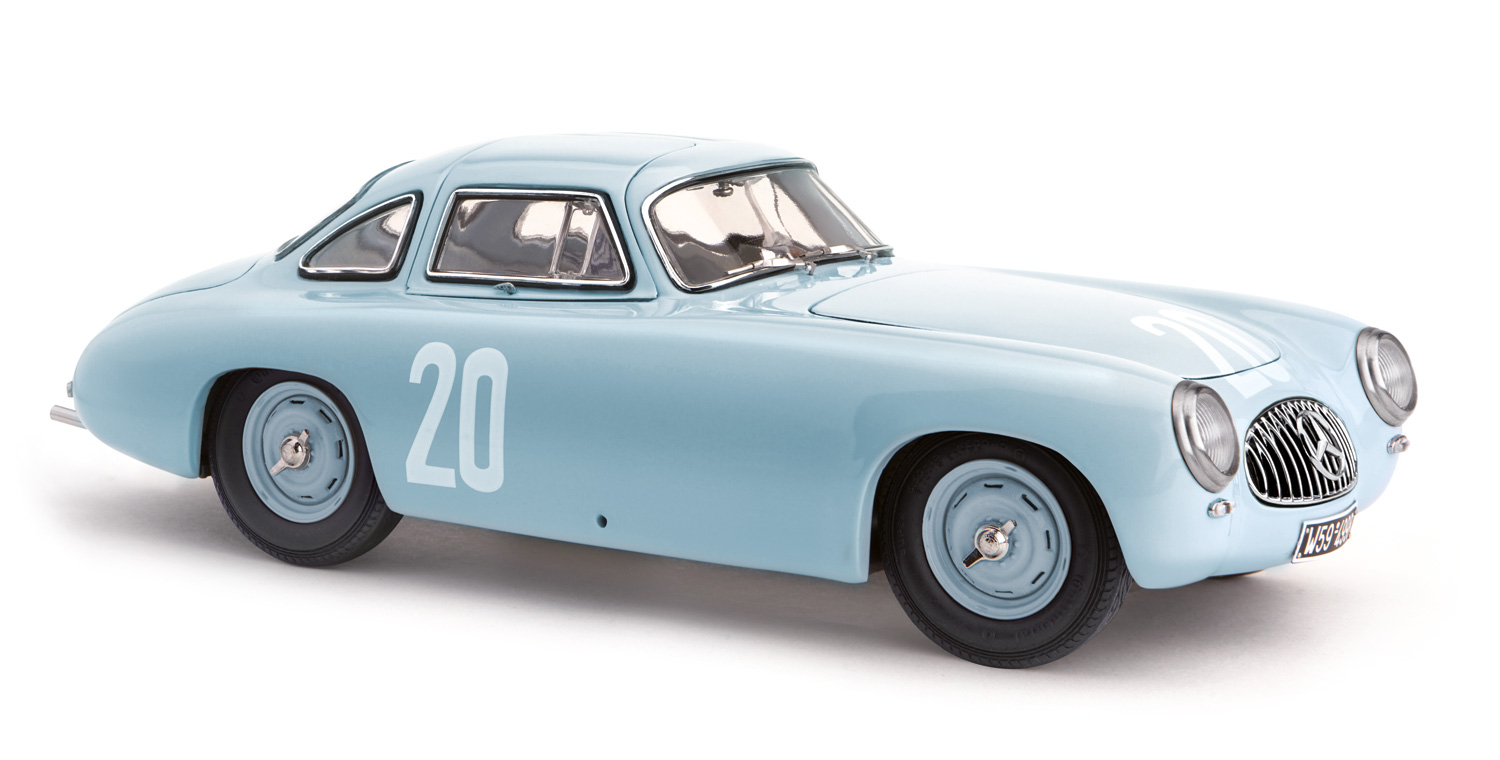 After participating in the 1952  Mille Miglia race, Mercedes-Benz was headed to the Swiss Grand Prix of Bern, where a rare treat for the audience was to take place. There was to be a simultaneous race with cars that possessed an engine 1.5 Liters or larger.  Mercedes-Benz entered three 300 SL Coupés. They were the #16 in Red, #18 in Green and #20 in Blue. CMC has masterfully replicated these three Icons to perfection in the 1:18th scale,

After extensive research and development the all new Mercedes-Benz Racing Coupé was developed. This would go on to be known as the 300SL( W194). The new coupé was featured smooth, rounded edges as well as sitting only 1,270mm high. The 300SL was unveiled to the press in March of 1952 at the Autobahn A81. This newly developed racing coupé marked Mercedes-Benz return to motorsport racing.

Featuring an unusual entry through a gull-wing door that opens from the lower edge of the side window and swivels upward around the centerpiece of the roof top, this streamlined sports car immediately cast a spell on the racing enthusiasts.

After a successful debut at the Mille Miglia, the 300SL moved on to the renewed competition of sports car racing at the Grand Prix of Bern on May 18th, 1952.

The three officially registered 300SL’s were decked out in uncommonly colorful finishes, including dark red (Rudolf Caracciola, #16), green (Karl Kling, #18), and blue (Hermann Lang, #20), not to mention the silver-colored finish of the replacement car with Fritz Rieß (#22) at its wheel. The team was ready to engage the rivals from Ferrari, Lancia, Aston Martin and Jaguar. At the end of the race, Mercedes-Benz celebrated a spectacular triple-victory, with the 1st, 2nd and 3rd places clinched by Karl Kling, Hermann Lang and Fritz Rieß respectively. The joy of victory, however, was tempered because a tragic accident had happened to Rudolf Caracciola when he veered off the track on a stalled front brake and crashed into a tree in round 13. He was taken to hospital with a broken femur and other injuries.

His recovery was long, and the bone fracture plus a knee surgery caused lasting impairment to his right leg, which put an end to Caracciola’s racing career.