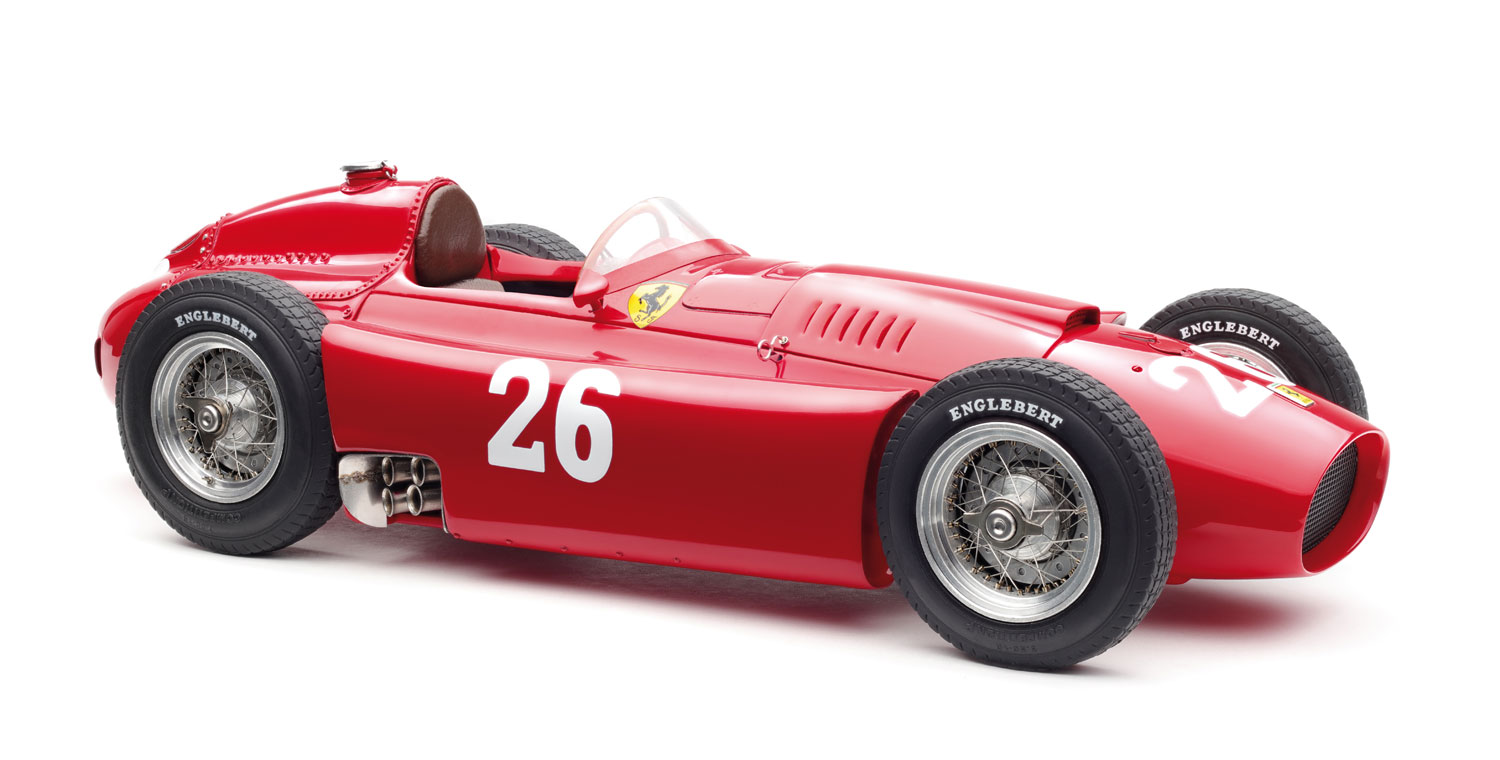 The 1956 GP of Italy is a powerful reminder of the sporting spirit shown by Peter Collins in an unprecedented generous act that has gone down in Formula 1 history.  As one of the topmost contenders for the World Drivers’ Championship title, Collins renounced his own pursuit when he let Fangio take over his #26 car in the middle of the Monza race. His selfless act enabled Fangio to finish the race as runner-up, thus winning the World Drivers’ Championship for a fourth time.

The Grand Prix of Italy 1956 took place on September 1, 1956 at the Autodromo Nazionale Monza. It was the eighth race of the season as well as the last competition for the decision of the 1956 automobile world championship.

The candidates for this title were Juan Manuel Fangio and Peter Collins, both driving a Ferrari D50, and Jean Behra driving a Maserati. It was a touch-and-go situation: if Fangio were to miss this race, both Pe-ter Collins and Jean Behra would stand a chance to win the World Championship title. However, in order for either of them to be crowned with the title, winning the fastest lap time, which carried a point in 1956, would also be necessary in addition to the race itself.

From Ferrari six D50s were sent to this final race of the season. Four were meant for their regular drivers: Fangio, Collins, Engenio Castellotti and Alfonso de Portago. Cars five and six were put to use by Luigi Musso and Wolfgang Graf Berghe von Trips, a German pilot who would have his first Formula 1 race in this season’s finale. Maserati also dispatched six cars to the race, with such outstanding pilots on its team: Stirling Moss, Jean Behr, Luigi Villoresi and Paco Godia. As for the non-Italian racing teams, there were the British Vanwall with Piero Taruffi, Harry Schell and Maurice Trintignant at the wheels of its fleet, and the team Connaught with three vehicles but only one commendable performance by Ron Flockhart during the race. For the last time, the French team Gordini also showed up, but its chances for a front seat turned out to be minimal.

The Monza race event represented a climax of the season. Contestants had to complete 50 laps for a total distance of 500 km. It took a combination of good driving skills, highest concentration, fine physique, clever racing strategies and a powerful and reliable car to put one in the front.

It became apparent in practice that Ferrari was likely to win. Fongio won pole position by eight-tenths of a second ahead of his teammate Castellotti, who finished second. Luigi Musso took the third place. The Vanwall driver Taruffi came in fourth. Only in position five did Maserati‘s trident emblem get to shine because of the efforts of its topmost driver Jean Behra. Stirling Moss, who still had hopes of the runner-up title, finished sixth, right in front of Ferrari driver Collins.

The subsequent course of racing was nothing short of being dramatic. It featured exciting duels as well as an unprecedented demonstration of human generosity and lofty spirit. As was so often the case, Fan-gio got off to a bad start in pole position. Castellotti and Musso got into the front, but impetuous dri-ving soon caused them to stop for tire changes in the pit, thus giving away their lead. In the fourth round, Stirling Moss surpassed Fangio and took over the lead until the tenth round. Surpringly Harry Schell, the Vanwall driver, got into the front on lap eleven, but one lap later, he handed the top spot back to Stirling Moss, who was able to maintain the lead till lap 45.

In the middle of heated racing, things happened that would impact the results of competition for the World Championship of Drivers. In lap 22, Jean Behra retired with a faulty ignition system. Driving a D50 with starting number 22, Fangio had to make a pit-stop because of a broken handle bar after lap 31. However, once the car was fixed, it was not Fangio but Castellotti who drove it to keep on with the race. A pit decision had been made that Fangio should continue his title competition in Luigi Musso’s car, instead. However, Musso ignored the order, leaving Fangio without a car. Fangio knew that his teamma-te Collins was only one victory and one fastest lap away from the title. He basically gave up any hopes.

This was when Peter Collins, whose Ferrari was wearing starting number 26, drove into the pit to have his tires checked. What happened then and there has become a well-remembered episode in racing history. On the spur of a selfless decision that could have only been inspired by an unprecedented sporting spirit, Collins handed over his car to Fangio, an older colleague as much as an opponent.
Collins was the only one in Formula 1 history to have voluntarily and selflessly passed on to a colleague the opportunity to win the world championship title. To justify such a decision, Collins might have told himself that he was still young and had many chances lying ahead. Unfortunatey,
this calculation did not work out. Two years later, he died of an accident on the Nürburgring circuit whe-re the 1958 German Grand Prix was held.

Back to the 1956 Monza GP, the race went on. With five laps left to go, Moss was ahead of Musso and Fangio, who was riding in Collins‘ # 26 car. But he ran out of fuel and got stranded in the middle of nowhere for refueling. This is when another selfless deed unfolded before the spectators. Driving a pri-vate Maserati, Luigi Piotti docked behind the rear end of Moss‘ Maserati, pushing Moss and his car to the Maserati box.

Thanks to this rescuing effort, Moss was able to resume racing and overtake Fangio from behind. For two laps, Musso was in the lead, but as bad luck would have it, he broke the handlebar and had to retire with a major victory so close in sight!

Stirlin Moss took over the lead again and won the race six seconds ahead of Fangio, who shared the points with Collins. With his share of these points, Fangio became the driver world champion of the year for a fourth time.

The 1956 Monza podium was not complete without Ron Flockhart, who raced for the Connaught Engine-ering team and finished third, an unprecedented success for his Connaught Type B-Alta. Here is the final list: